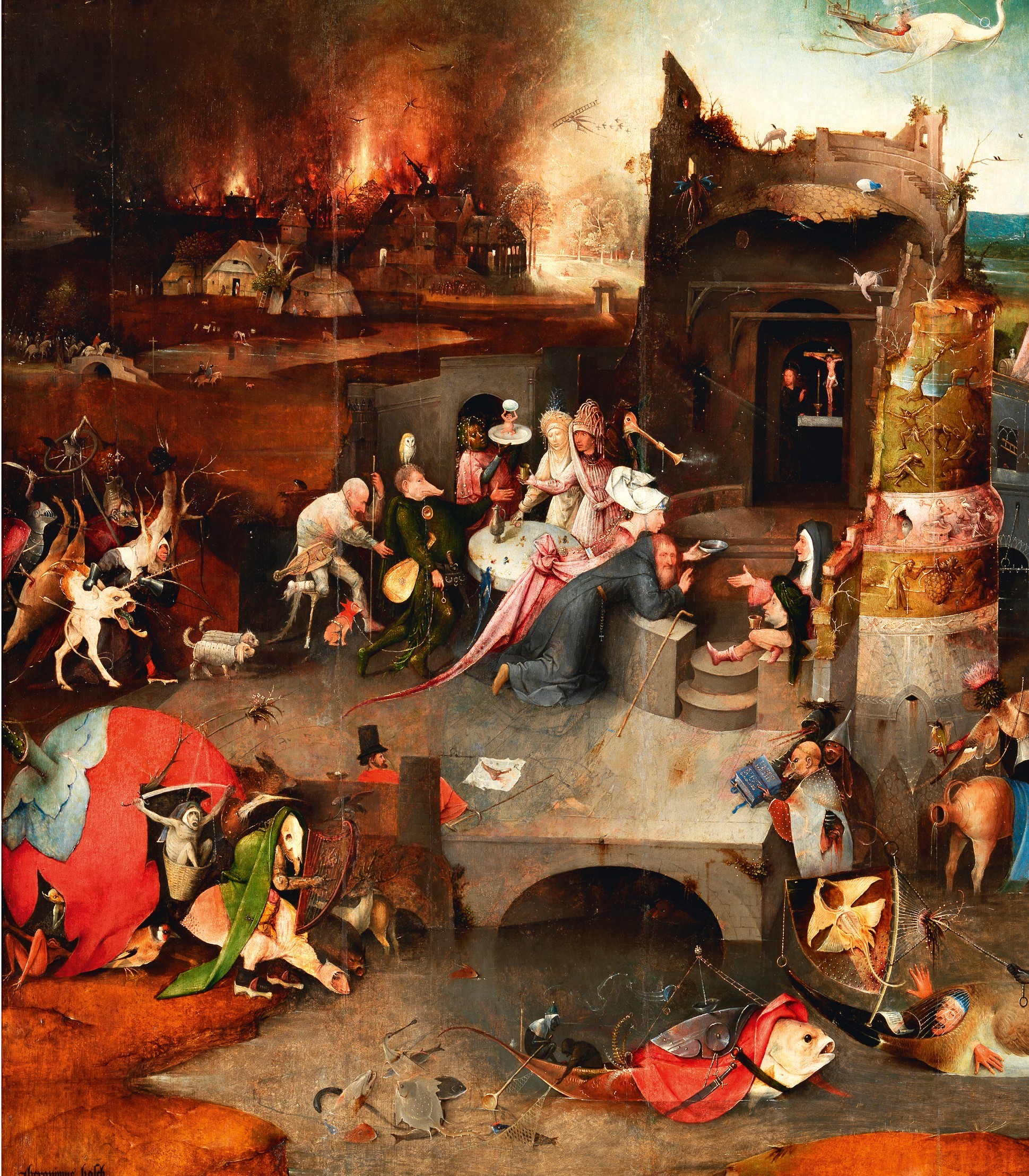 Bosch
one another Renaissance

For the first time, the city of Milan, under the artistic direction of Palazzo Reale and Castello Sforzesco, pays tribute to the great Flemish genius and to his success in southern Europe, with a brand new exhibition project revolving around a fascinating thesis: Bosch is the emblem of an “alternative” Renaissance, which is far from the Renaissance governed by the myth of classicism and is evidence of the existence of a plurality of Renaissances, with its art centres scattered throughout Europe.

Jheronimus Bosch (1453 - 1516) is known worldwide for his language, made of dreamlike visions and peculiar worlds, fires, monstrous creatures, and fantastic figures.

Open to the public until March 12th, 2023, the exhibition “Bosch and Another Renaissance” is promoted by the Municipality of Milan - Culture, Palazzo Reale and Castello Sforzesco, organized by 24 ORE Cultura-Gruppo 24 ORE and  curated by Bernard Aikema, previously a professor of Modern Art History at the University of Verona, Fernando Checa Cremades, professor of Art History at the Complutense University of Madrid and former director of the Prado Museum and Claudio Salsi, the director of Castello Sforzesco, the Archaeological and Historical Museums and professor of history of engraving at the Catholic University of Milan.

The exhibition itinerary encompasses a hundred works of art including paintings, sculptures, tapestries, engravings, bronzes, and ancient volumes, including some 30 rare and precious objects from wunderkammerns.

In this extremely rich corpus, the visitor will find some of Bosch's most celebrated masterpieces and works inspired by the Master's subjects, which had never before been displayed together in a single exhibition. In fact, Bosch is the author of very few works universally attributed to him, which are preserved in museums all around the world. Precisely because they are so rare and precious, this artist's masterpieces rarely leave the museums and even more rarely do we have the opportunity to see them together in a single exhibition. Due to their fragility and peculiar state of preservation, some works will have to be returned to their museum locations before the exhibition closes. These are the works from the Museo Làzaro Galdiano in Madrid and the two works borrowed from the Uffizi Galleries.

The exhibition at Palazzo Reale is not a conventional monograph one: it creates a dialogue between masterpieces traditionally attributed to the Master and important works by other Flemish, Italian, and Spanish masters, thus favouring a comparison aimed at explaining the visitor to which extent the “other” Renaissance - not just the Italian one and not just Bosch - would influence great artists such as Titian, Raphael, Gerolamo Savoldo, Dosso Dossi, El Greco and many others, in the same years or immediately after.

The result of a five-year research effort and the joint work of an unprecedented international cultural cooperation network including governments, embassies, museums, cultural institutes and collectors, was a unique exhibition in terms of the narrative power of an entire artistic era and the importance and diversity of the comparisons suggested by the exhibition.

Thanks to the collaboration between Italian institutions, in particular the Italian Embassy in Portugal and also the Italian Cultural Institute in Lisbon with the Museu Nacional de Arte Antiga, the monumental Triptych of the Temptations of St. Anthony - a work that has left Portugal only a couple of times during the 20th century and is now coming to Italy for the first time - will be displayed at Palazzo Reale. The Museu Nacional de Arte Antiga in Lisbon, in its turn, borrowed “our” Pala Trivulzio (also known as Madonna in Glory and Saints) by Andrea Mantegna, which is part of the Castello Sforzesco's Art Collections.

Another important loan, the result of an exchange with the city of Bruges, is the Master's monumental work from the Groeningemuseum in Bruges, the Triptych of the Last Judgment, which was originally part of the collection of Venetian Cardinal Marino Grimani.

The work by Bosch borrowed from the Prado Museum, The Temptations of St. Anthony, and the masterpiece borrowed from the Museo Lázaro Galdiano, i.e. the Master's valuable panel painting St. John the Baptist, are of paramount importance for the exhibition project. Also by Bosch is the Triptych of the Hermits from the Gallerie dell’Accademia in Venice, the collection of Cardinal Domenico Grimani, one of the most important collectors of his time and among the very few owners of Bosch's works in Italy.

THE THESIS OF THE EXHIBITION

Strange as it may sound, Bosch's fame did not begin in Flanders, where the artist was born, but in southern Europe. In fact, the “Bosch phenomenon” originated in the Mediterranean world, specifically in 16th-century Spain and Italy.

At that time, however, Renaissance classicism dominated in Italy. But it is precisely here that the fantastic and dreamlike language of Bosch and his followers, the protagonists of “another Renaissance”, would find the most fertile and mature ground, where they could grow and become a figurative and cultural model for their era and for many of the subsequent generations of artists, even centuries later.

In particular, the visitor may enjoy a comparison between the four tapestries by Bosch from the Escorial and a cartoon for the fifth tapestry - which unfortunately got lost - identified in the collections of the Uffizi Galleries.

In this regard, it is worth noting the immense importance of tapestry in sixteenth-century European culture, in artistic and economic terms: indeed, tapestry was a veritable status symbol of the elite. That is why being able to admire the entire cycle of Bosch’s tapestries is a once-in-a-lifetime opportunity, made possible by the loans from the Escorial and the Gallerie degli Uffizi: in fact, the four tapestries from the Escorial have never been exhibited together outside the museum, and the comparison with the Elephant cartoon, preparing the fifth tapestry in the series - now lost - is totally unprecedented.

This itinerary aims at illustrating the resounding success of Jheronimus Bosch's artistic language in southern Europe, and even overseas, in the period between the sixteenth century and the early seventeenth century, with particular reference to the collecting trends of the time, especially in Italy and Spain.

Thus, in Venice, Bosch's expressive uniqueness was readily grasped by one of the greatest collectors of the time, the man of letters and Cardinal Domenico Grimani. It is thanks to his far-sighted taste and the Grimani collection, housed in the Gallerie dell'Accademia in Venice, that today Italy hosts as many as three works by Bosch, including the Triptych of the Hermits, now on display in the rooms of Palazzo Reale.

The same can be said of Spain, where, from the 16th century until today, most of Bosch's major works can be found between the Prado Museum and the Escorial Monastery. It is no coincidence that Spanish authors are the first and most engaged critics of Bosch.

This was the geographical and cultural area where the works of the artist and his followers were especially in demand. In this regard, we could argue that Bosch’s language, in the decades following the Master's death, was at the heart of an unprecedented European entrepreneurial operation.

In fact, the fortune of Bosch’s language is at the origin of a veritable “Alternative Renaissance”, which is not much recognized, even in specialized literature.

Why does the exhibition also suggest comparisons?

The “fashion” for “Bosch-style” imagery, which became established in Spain and Italy and, later, in the rest of Europe, was reflected in a series of spectacular works of art, made using various techniques and drawing from a variety of sources, among which the stunning cycle of the four tapestries of the Escorial and the elephant tapestry by the French painter Antoine Caron stand out.

All of these works attest to the spreading in the Mediterranean region of visionary and dreamlike motifs inspired by the Flemish artist's imagery.

These creations, in turn, inspired a large number of prominent painters and engravers. Especially the prints that contributed to the dissemination of Bosch’s language, among which the work of Pieter Bruegel the Elder (Bosch's most important follower) stands out and is featured in the exhibition with a dozen engravings inspired by his compositions.

The engravings contributed greatly to disseminating a taste for images of nocturnal fires, scenes of witchcraft, and dreamlike and magical visions. This is confirmed by works such as Marcantonio Raimondi's or Agostino Veneziano’s Stregozzo, Albrecht Dürer 's Sea Monster, Aldo Manuzio's literary-editorial masterpiece, Francesco Colonna's Hypnerotomachia Poliphili, and, finally, the Allegory of human life by Giorgio Ghisi.

The proliferation of rare, bizarre, and precious objects that characterizes the fashion of the eclectic collections typical of 16th-century international taste is evoked in the last room, set up as an original Wunderkammer, thanks to the collaboration of the Milan Museum of Natural History and the Castello Sforzesco Collections. The studied and calculated presence of some thirty “chamber of wonder” objects brings about immediate and direct comparison with the chaotic and unrealistic representation of one of Bosch's most challenging masterpieces: The Garden of Delights, featured in the exhibition in the dual version of a coeval painting and a tapestry.

The Wunderkammern of the last Habsburg rulers were extremely famous, especially the one of Rudolf II of Habsburg, whose portrait, the famous Vertumno painted by Milanese artist Arcimboldo (an exceptional loan from the Skokloster Castle, Sweden), is featured in the exhibition within the reproduced wunderkammer, and fully represents the eclecticism typical of this collecting taste.

Magic and dreaming, with their unpredictable nature, not dominated by rationality, seem to be the outcome of a “see-though” vision of everyday reality, which reveals the anxieties, obsessions, and contradictory nature of man and society. This is the expression of the prevailing cultural climate on the eve of two momentous turning points: first the Reformation, then the Counter-Reformation.

These figurative categories are also an opportunity to investigate the depths of the inner world and its inconsistencies and reflect upon them; they were appreciated among educated and curious cultural circles and, in general, among a public who was not unfamiliar with markedly moral intentions.

Bosch's religious and secular compositions are also dominated by the concept of the complexity of reality, which in its extremes is populated with decomposed figures, paradoxical and illogical situations, deconstructed, monstrous, and cruel beings, but also with the purest figures of naked youths populating the earth without modesty: in short, a world turned upside down. In this universe, temptation and error are always lurking, ready to ruin man. The sixteenth-century man was aware that works of art carried symbolic messages that had to be interpreted in an educational and formative sense, and we think that, against this background, they especially welcomed and appreciated these subjects.

The so-called 'world of grotesques' is the other side of the same coin when speaking of the fantastic in Bosch.

In fact, the fashion for “Bosch-style” art can be connected back to an already established interest in “monstrosities” and the “grotesque”, which appeared - together with its disruptive effects - at the end of the 15th century in Tuscany and northern Italy, in paintings, drawings, engravings, and bronzes of excellent workmanship and great imagination (Bernardo Parentino, Severo da Ravenna, Marcantonio Raimondi, Giorgio Ghisi). Moreover, it can also be found in the fashion for old-fashioned grotesques, which spread in early 16th century Italy, Spain, and France.

The itinerary ends with an audio-visual work, Tríptiko. A vision inspired by Hieronymus Bosch, a journey through the Flemish painter's dream world, imagined by the artists of Karmachina. The title recalls the format of the main work having inspired the show: the Triptych of the Garden of Delights. The show includes both more figurative moments, where the reference to Bosch's panels is most evident, and more abstract ones, which freely evoke the visionary and “lysergic” nature of the master's work. The paintings are brought to life through the use of the most innovative technologies: Bosch’s painting is reworked through digital animation techniques thus participating in the construction of an immersive, evocative, and bewitching narrative.

Groups: booking and purchase required by contacting the Group Office T 02.54912 (online tickets not available).
Entrance to the exhibition is not allowed to groups not booked.